Dunapack Packaging expands its productions site near Athens by an additional 7.000m².

Since the second half of 2019, Dunapack Packaging Hellas S.A. boosts its expansion plans in Greece with a further plant enlargement of 6.960m². The extension is mainly driven by an enlargement of the converting area as well as a new warehouse for raw materials and finished goods. 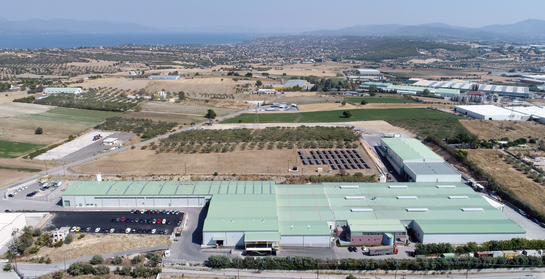 To optimize internal and external logistics, the new state-of-the-art facility is split into two levels connected by a fully automated handling system and elevators. The plant will reach its total production capacity of 140 Mio m² on completion in May 2022.

The expansion includes a second packing line and an upgrade for the existing corrugator. Additionally, two new machines, an Inliner and a 2,1-meter Flatbed Die-Cutter will allow even more flexibility when producing custom made packaging solutions.

“With the new plant setup, Dunapack Packaging Hellas will be one of the most modern and versatile packaging plants in the region. The state-of-the-art machinery setup combined with our long-term management and sales expertise will guarantee the best and most efficient packaging solution for our customers” said Vassilis Exarchos, Cluster MD of Dunapack Packaging Hellas.

Max Hoelbl, Chairman of Dunapack Packaging Division said: ”When we acquired the plant in 2016, the production volume was 40 Mio m². Now we are heading for 140 Mio m². This would not have been possible, without the commitment of our local team and the increasing customer base we created via first class products and service.
The upgrade will be very beneficial for our customers and strengthen our strategic position in this important and vibrant market.”

Dunapack Packaging Hellas SA (ex. Viokyt) was founded in 1973. The company is member of Dunapack Packaging Division of the Prinzhorn Group, which in 2016 acquired 100% of Viokyt's shares. At that point in time, Dunapack Packaging Hellas, located in Schimatari Vioitias, had 149 employees with 40 Mio m² sales volume.
The first investment cycle began in the second half of 2016 and its implementation was completed at the end of the 1st half of 2018. Apart from the expansion of privately owned facilities by 5.150 m² a new corrugator as well as two new converting machines, a new automated packing line and handling system were installed. With the full utilization of the machines the plant has reached the 83 Mio m² production capacity.In parallel, a new separate location was created in order to host Digital printed and cut packaging materials unit which now works independently. Additionally, two adjustment plots were acquired with total surface of 30 T m² in order to facilitate the second cycle of the investment plan.

Dunapack Packaging, Hamburger Containerboard and Hamburger Recycling Divisions are part of family owned and managed Prinzhorn Group, which employs 10.000 people in 16 countries and ranks among the European market leaders in the recycling, paper and packaging industry. With an annual turnover of 2,1 billion Euro in 2021, the group is number three in Europe in this segment. The family-owned Prinzhorn Group has its headquarters in Vienna / Austria and is structured in three divisions: Dunapack Packaging (corrugated packaging solutions), Hamburger Containerboard (production of containerboard) and Hamburger Recycling (collection and trading of secondary raw material).